Meet a modern-day Pippi Longstocking: she shares her small, traditional red and white timber house in the wilderness of the south of Sweden with five cats and one dog, Stanley. Two rams live outside, along with the occasional elk. She climbs trees, works with an axe and a chainsaw, has no fear of anything or anyone. Arborist Viktoria Carstens invites us to step into her exciting world.

With her piercing, sparkling eyes, freckles, and two red pigtails poking out from underneath her helmet, she looks a bit like a modern-day version of Pippi Longstocking, the most famous creation of Swedish author Astrid Lindgren. Viktoria Carstens enjoys climbing trees – another trait she shares with Pippi. But this 27-year-old does not climb trees just for fun. She is a professional arborist.

Like Pippi, Viktoria is also adventurous, brave, and strong. She lives alone in a small, traditional red and white timber house at the edge of the forest somewhere in the wild south of Sweden. She has to drive half an hour – in either direction – to reach the nearest shop. She has electricity and an internet connection, but no running water. The toilet is outside. The pipes freeze up in winter. “Nobody would want to live here,” she says with a mischievous grin, and shrugs her shoulders. Nobody apart from her, that is. “Hackabäck,” as she calls her house, is a little piece of paradise for her, and she shares it with five cats, her dog Stanley, and two rams. Every now and then, an elk will make an appearance and have a look from a safe distance. There is a tool shed right beside the house, where Viktoria stores “her treasure.” By this, she means countless chainsaws, axes, tools of all kinds, and of course her equipment, which she needs to reach and work at dizzying heights. Her equipment includes a special harness, which weighs four to five kilos and is full of carabiners and rope. It looks like a mountaineer’s climbing gear and is a vital piece of safety equipment for an arborist like her.

Despite all her industriousness, she also finds time for love: Viktoria is now engaged to Zac, having met the U.S. treehouse builder on Instagram.

Viktoria may be such a free spirit today because she was born in Roskilde, Denmark, the site of the world-famous festival, or maybe it’s due to her Waldorf education. She does not share many traits with other people. Of course, there are times when she puts on something a bit more elegant than her protective gear, and wears make-up instead of dirt on her face. But this has been her dream since she was a child – to be outside working with animals, people, and nature. A chainsaw course, which she actually ended up taking by chance to fill in the time before starting her studies, was ultimately what pointed her in the right direction: “Instead of studying nature and cultural communications as originally planned, I spent three years training as a forest and nature technology engineer at the Skovskolen Forest and Landscape College at the University of Copenhagen.” And she has never looked back.

»I like that my work means that I can protect and preserve the nature around me.«

Trees grow in Sweden, covering around 70 percent of the Swedish land surface.

Every day is different and, despite the best possible preparation, something unexpected always happens. However, the most important thing is that she is able to work in and with nature, make a contribution, and take care of something that is very close to her heart.

Yet the job is not as easy as Viktoria makes it sound in her excitement to talk about it. Nor is it without its hazards. She has had to learn from her mistakes “the hard way,” and now inspects trees more closely before she starts work on them. This is because trees, like people, can sometimes have “a real misfit” among them. But she is rarely afraid: “It is of course healthy to be cautious and prepared when doing such a risky job.” When she talks about this side of it, the 27-year-old becomes serious. For all the enthusiasm she has for her work and the ease with which she seems to tackle everything, some minor accidents that she and her colleagues have endured have shown her time and again how quickly the tables can turn, and the hazards that come with the job.

Animals live with Viktoria on her property surrounded by forest. And every now and then, an elk stops by.

But the idea of slowing down or even doing another job altogether is unthinkable! In fact, the opposite is the case for the likable, self-proclaimed adrenaline junkie . Since 2017, Viktoria’s to-do list has now grown to include competitions in which the best male and female arborists compete against each other. She has now competed in more than 15 competitions in Denmark, Norway, and Sweden, and even qualified for the European championships. She celebrated her greatest success in 2021: as the number one Danish arborist, she may now represent her home country at both the European championships and the world championships in Copenhagen in September 2022.

»It makes me happy to inspire women to follow their dreams and to break down gender norms.«

“Arborists are a very special group,” Viktoria says and laughs. The rivals all help each other, give each other advice, and lend each other equipment. “It’s fantastic to see other super talented and experienced climbers, and get to know and use new equipment.” The competitions usually take place in parks or recreation centers where there are enough tall trees to accommodate all five events of the competition. These include “Work Climb,” the ringing of a bell with a handsaw in the crown of a tree to imitate pruning; “Areal Rescue,” the simulation of a rescue situation where contestants have to safely lower a climber who has sustained an injury and is unable to descend from the crown without assistance; “Throwline,” to test the contestants’ ability to place a throwline and/or climbing line in the crown of a tree; “Belayed Speed Climb,” a race to the crown to be the first to ring a bell; and finally “Ascent Event,” where contestants attach their climbing equipment to the ascent line(s) as fast as possible along a route measuring 12 to 23 meters. The points from these events are added up and the top women and top men take part in the Masters Challenge, which is essentially a mix of all of the events, just in a different tree.

For Viktoria Carstens, her job is also something she is very passionate about.

And if anyone thought that Viktoria Carstens likes to relax in her free time, they would be mistaken. She is very active on Instagram, where she regularly shares her experiences with over 78,000 subscribers and does not hide her preference for STIHL. She has been a brand ambassador for the last three years and more, after all. A “very natural union” that helps her show the world that women can also have a great job in this admittedly hard and very physical industry. “It makes me very happy to be in contact with people all over the world via social media, and to inspire women to follow their dreams and break down gender norms.” This makes the extra work she does worth it.

»To have the best tool for each job makes every day easier.«

Viktoria Carstens
The 27-year-old feels just as comfortable at dizzying heights as she does on the ground. And when the weather is good, her job is even better.
What does an Arborist do?

Arborists like Viktoria Carstens perform all the work associated with maintaining, treating, or removing trees. They take care of their conservation. They prune trees and plant new seedlings. They check whether trees are healthy and treat or remove the trees that have become infested with pests.

Arborists use traditional chainsaws or other machines to cut trees and shrubs. When working, they often have to climb up a tree using appropriate safety equipment, particularly when they are trimming the crown. It’s often necessary for an arborist to check up around the top of the tree to see if there is any damage or nesting animals that need to be protected.

It’s not completely altruistic: “The close collaboration allows me to work with the latest professional tools from STIHL. And that makes the greatest difference in my field of work.” The better the equipment she uses, the less demanding the work in the tree. She also appreciates the innovative power of the German family-owned company. That drive to always be better every time she puts on her helmet or takes down her chainsaw from the rack is something she channels from the STIHL philosophy. 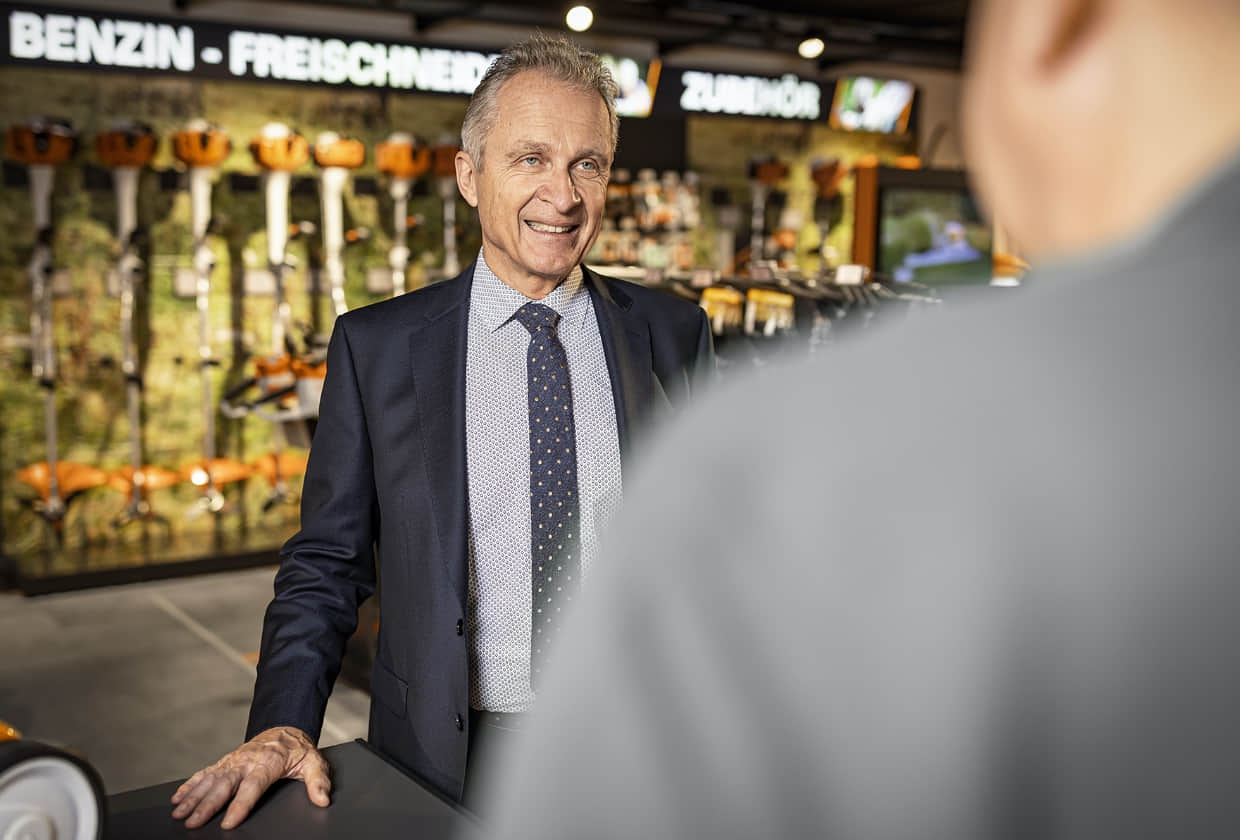 As the Executive Board member for Marketing and Sales, Norbert Pick is well versed in the ever-changing landscape that is customer needs. In our interview, he reports on the challenges currently faced by STIHL. 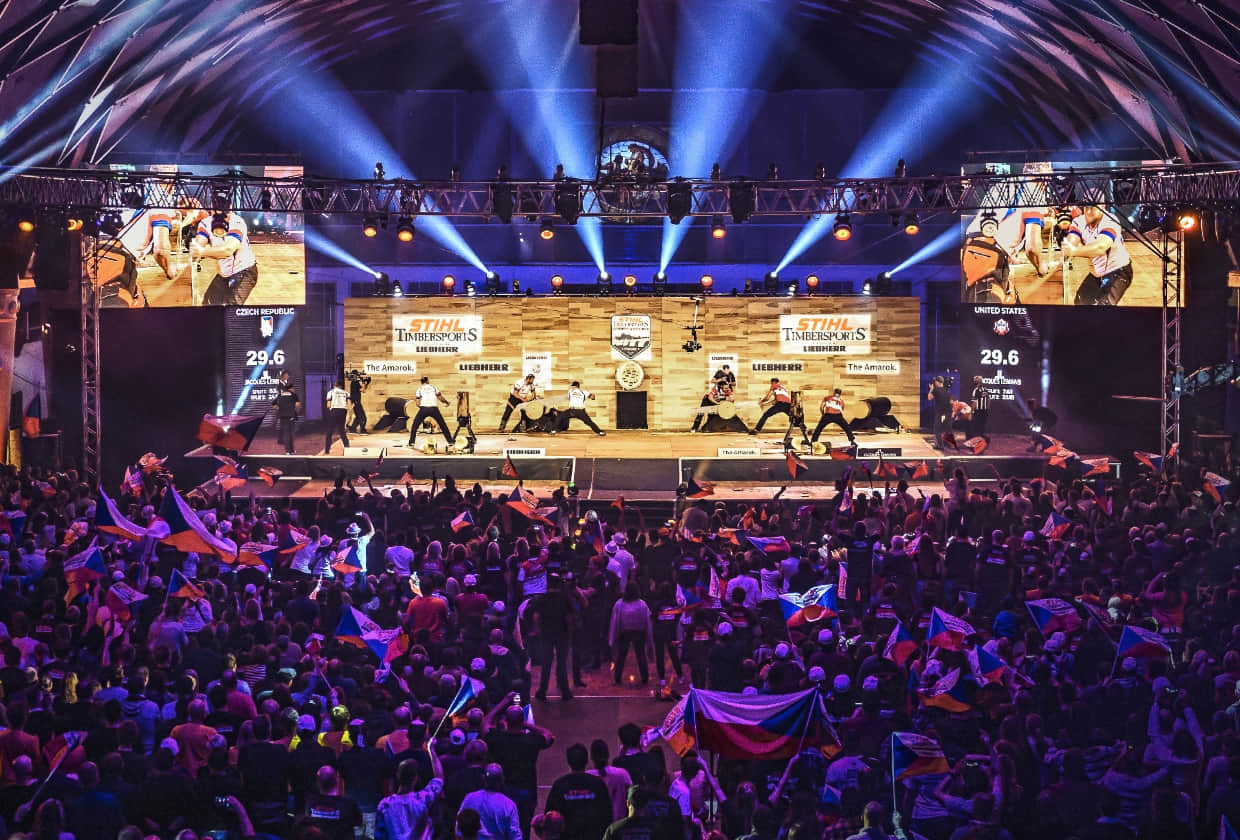 The STIHL TIMBERSPORTS® Series stands for exciting competitions, top-flight athletic performances, and lots of emotions. A look behind the scenes of a sport that has caused a global buzz.